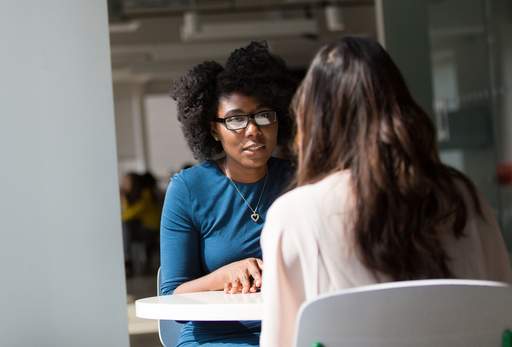 "Sometimes it helps to simply practice the whole thing"

Working with training actors
By:

"So what we're putting on stage here is the conversation between you and the division director."

"That's right. I've got that conversation pretty much coming up."

"What makes the conversation so difficult for you?"

"I just can't get to him. He's not willing to talk, he's impatient and suspicious. It makes me feel insecure every time."

Do you know this too? You have a difficult conversation coming up or need to get an unpleasant message across. Someone annoys you, triggers you, you fall into the same trap again and again, or you are dissatisfied with the outcome.

Sometimes it helps to simply practice the whole thing.

Preferably, of course, with the person you're talking about. Because then two people learn at once and there is no need for a transfer. But that doesn't always work: sometimes the situation is too personal, sometimes the time doesn't fit, sometimes it's about issues that aren't suitable for practicing with the person it concerns (like giving notice). In such a case, working with a training actor helps.

How the work with training actors was born

The idea for this goes back many years, when Kessels & Smit was asked by the Dutch police in the 1980s to help them reorganize their basic training. Because we always organize learning as much as possible in everyday life, our approach here was also to let the trainees run along with experienced colleagues, to let them give themselves feedback and to try out and reflect on different actions themselves at the relevant moment. In this specific case, however, we reached our limits, because how is that supposed to work, for example, in cases of domestic violence? When adrenaline and emotion play a major role and action has to be taken very quickly? When learning at work is not safe or the stakes are high?

The colleagues thought that it would be best to work with people who could play out the situation very realistically and at the same time give the police officers involved reflective feedback. The idea of training acting was born: professional actors who are additionally trained to move along with the counterpart (i.e. to react differently to changed actions) and to give feedback both as actors and out of their role. The police officers had to deal with their own very real emotional state at the moment of aggression while acting professionally. Afterwards, they were given specific feedback on what they triggered in their counterparts and how things could possibly be done better.

Even in less dramatic situations we still like to work with training actors, because we regularly experience that the person practicing learns a lot and efficiently in a very short time.

Impact and how it works

Why is it so helpful to practice with training actors?

We focus on a short scene, zooming in the very concrete moment where the challenge lies. There are 3 different roles: the person practicing, the training actor and the facilitator. The latter clarifies in the beginning what exactly the person practicing wants to achieve (this awareness alone is often a first helpful intervention). The training actor asks for typical phrases and behaviors of the counterpart and puts himself or herself in this person's place in a matter of seconds.

An exercise sequence lasts between 30 and 60 minutes. The facilitator accompanies, observes and enables short reflections through time-outs, analyzes the dynamics between the two people and make (sometimes direct) suggestions as to what the practicing person can do differently. The effect of this different action is immediate, experienced with all senses and intellectually comprehensible. Everything plays into the practice: Body posture, looks, inner attitude, word choice, pauses. These are highly concentrated, intense minutes.

The whole thing is not coaching, it is about practicing and trying out. It is about your own, new perception and an expansion of your own playing field. With the advantage of doing this from different perspectives and also of getting feedback from very different perspectives from the facilitator, the training actor and from within the role. This triad is rich and has a lasting effect.